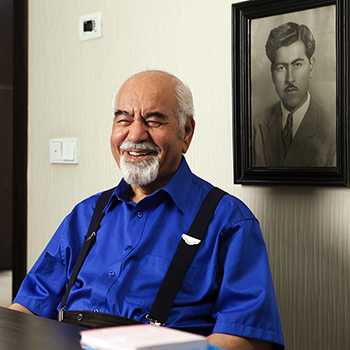 Founder of the foundry and ferroalloy industry

Ali Asghar Hajibaba’s main job is in industry. He is known as the founder of Iran’s foundry and ferroalloy industry. This 83-year-old entrepreneur went after realizing a new vision around the 1960s and made an important decision. He left his ancestral business and convinced his entire family to embark on a new industry. In the hope that Iran was moving toward industrialization, in 1963 he established “Pars Metal” Company, and then in 1969 he established “Iran Radiator Woks” Company. Being a graduate in Industrial Management who was highly skilled in this field, in February 1979 he was chosen as a member of the board of directors at Iran National Corporation. Hajibaba, who had no goal other than the advancement of his home country’s economy and upgrading the industrial level, also established “Iran Ferrosilicon” Company in 1982. Today this family are well-known in the steel industry.