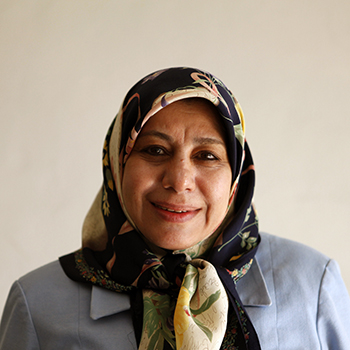 The name Firouzeh Saber is closely tied with the word “entrepreneur”. Although she neither owns a commercial company or a factory, but for the past 15 years and even before that, she has been active in the area of research, development and education of entrepreneurship. Firouzeh Saber has a master’s degree in Executive Management and has defended her thesis under the title “Ways to Develop Women’s Entrepreneurship in Iran”. With the background of research in the field of economics at the National Radio and Television as well as being the Director of Education and Research at Industrial Management Organization, in 1999 with a number of her like-minded friends, she established Noandish Research Institute with the aim of conducting research, consultation and educational projects in the field of economy and entrepreneurship, and the National Project for the Promotion of Entrepreneurship among Women in Iran has been one such project. Subsequently, in 2004, joined by a number of women entrepreneurs and businesswomen, founded the Association of Iranian Women Entrepreneurs with the mission of promoting entrepreneurship among the young generation and improving the management capacity of women entrepreneurs. In 2005, with the help of a number of her friends, she established The Entrepreneurship Development Foundation for Women and Youth. This was a non-governmental organization whose main mission was to promote creative thinking and productive activity among women and youth which provides fertile grounds for the discovery, development and fruition of entrepreneurially creative talents in the economics, social and cultural areas. This foundation has assumed two major roles for itself: first, capacity building and second, network building which incorporates a wide spectrum of neo-entrepreneurs, adolescent youths, entrepreneurs and social entrepreneurs